Scout Towers. That’s the key to completing this map; without them you will not be able to reach the boss or the pink blobs beyond the first line.

The only Towers which are needed to complete the map are:

Start with two focus towers. These will eliminate all the enemies for all of the first waves of enemies. Your first focus tower should be placed directly below the big pink blob on the left hand side. 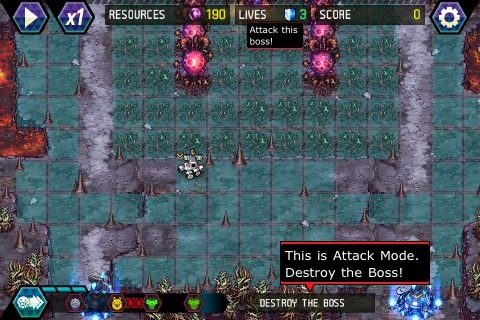 Start with one focus tower and when you have enough resources, build another one.

Upgrade both of the focus towers to their maximum. These will be very effective and will allow you to start building the other towers which are needed to complete the level and the game.

The blobs will give you 500 resources once defeated. With this money build flame towers in the top right and left of the level. By upgrading these towers you can wipe off around half of all the enemies health before they get to your focus towers. Very handy.

Once you’ve taken out the first two big pink blobs, build another line of three scout towers and repeat. You’ll want to end up with a block of nine scout towers with the top line finally being able to reach the boss. Target the boss and in the meantime I built splash towers to help out and to catch any quick enemies from getting through. 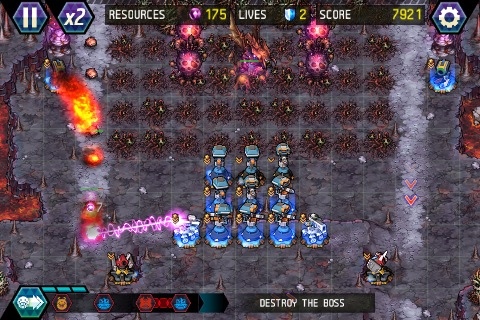 This is the set-up that allowed me to defeat this level. It’s hard. I had to again play it on x1 once then pink squids started coming, and I found it helpful to individually target the squids so they didn’t freeze the focus towers.