I found this level a little tricky at first. I’d almost got the solution for completing the level on hard, but I always seemed to lose a life along the way. So a special thanks to daluke for his tweeking suggestions that made this possible.

Start with a laser tower towards the bottom right hand corner. The first few waves contain weak enemies and the laser tower will have no problem is eliminating them.

Next build a cannon tower here. By the end of the level you’ll want to have destroyed all the ‘blobs’ for the extra resources and space. By placing the cannon tower here, you’ll be able to target a large portion of the towers at the top of the map. Start by targeting the largest blob.

Make sure to upgrade all the time and as soon as you can. In the moments you have between waves, destroy the blobs around you using the cannon tower.

Place your next cannon tower here as it will be able to target the three ‘blobs’ at the bottom of the map. Again, upgrade as soon as possible. 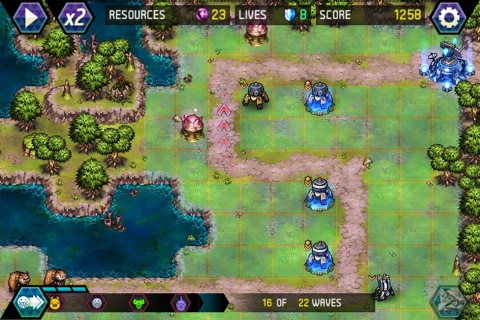 Build a splash tower but only upgrade it once. Use any additional resources to build another cannon tower towards the top of the map. 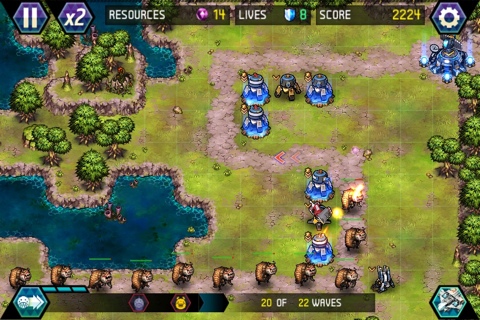 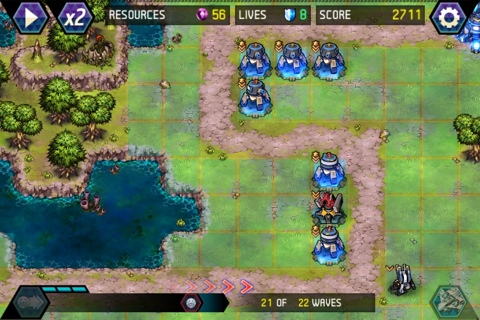 Comments Off on A7. The Bluffs (Hard)

Laser towers cannot harm the pink blobs. But they can target them an fire at them as if they were able to cause harm. This level can be completed on hard by using this principle.

Start by placing a laser tower in the centre of the gap in middle of the blobs. Then target the pink blob to the left of the laser tower. The laser tower will then rapidly fire down the main line where then enemies enter the level.

As soon as you can, upgrade the laser tower. During this phase you may need to temporarily stop targeting the pink blob. This will be needed for you to eliminate three enemies which are able to get through.

Next, upgrade the laser tower to it’s maximum strength.

Once you’ve taken out this blob, then you should build another laser tower and fully upgrade it. 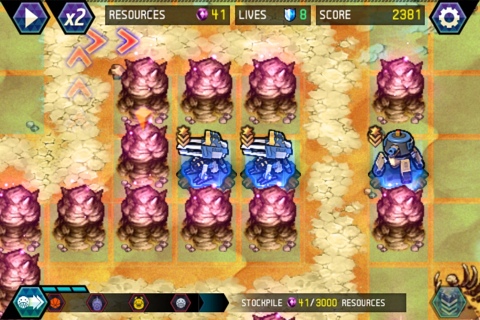 Build slow towers where the enemies enter the level. This will help slow them down so the laser towers are able to get more shots off on them and cause them greater damage.

As the objective of this level is to stockpile 3000 resources, you need to start collecting them. Do this by building generators on the pink mist on the bottom right of the map. 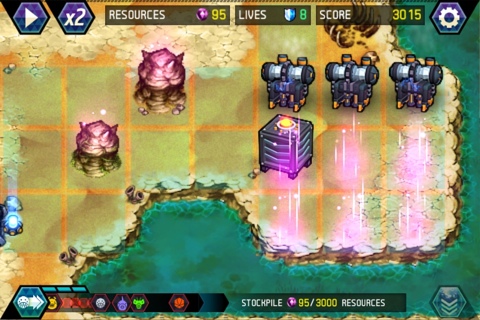 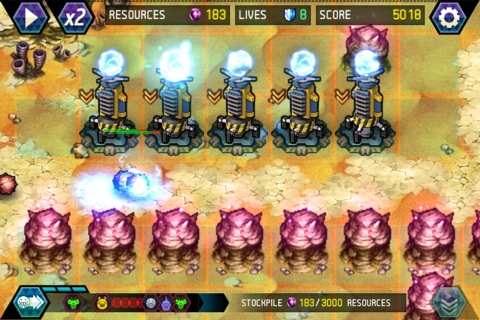 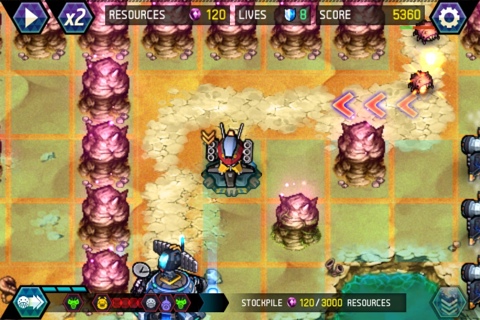 If you find that enemies are still getting through past the laser towers then you should build a couple of splash towers as I’ve done. These will stop all enemies from getting by. 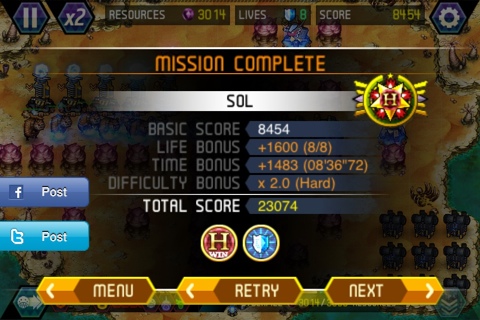 This level is easy to complete on hard. You’ll only need splash towers and I’d recommend playing the level on x1 speed as you’ll need to quickly upgrade your towers.

Start by building four towers in the middle. Upgrade these to their maximum then build two more on either side. Then upgrade.

Comments Off on B5. Wasteland (Hard)

I first tried using laser towers when playing this level, but I found that despite having fully upgraded laser towers the enemies were still able to get past and enter the base.

Instead I started by using a line of splash towers. I then added slow towers and upgraded everything. Towards the end i built and upgraded a laser tower down the long straight, although I’m not entirely sure this was necessary. 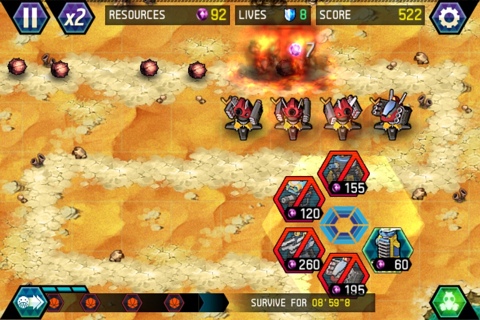 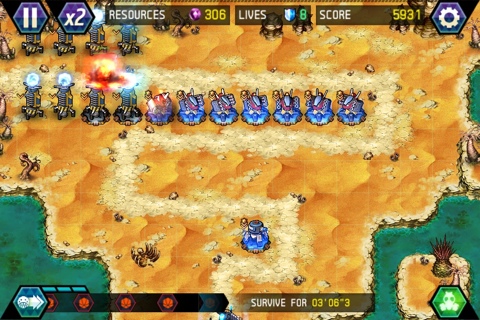 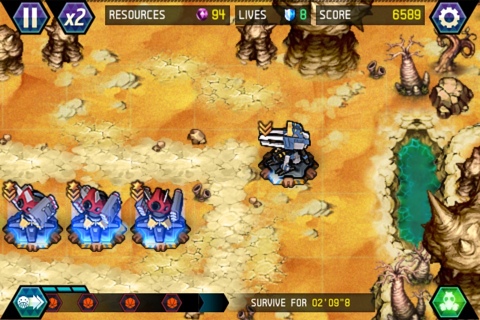 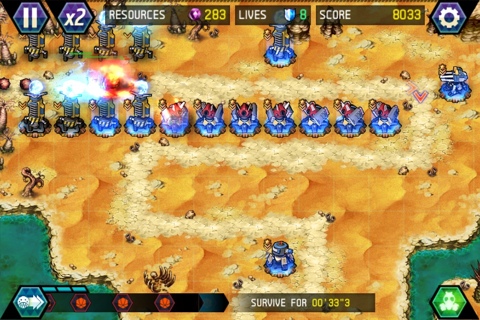 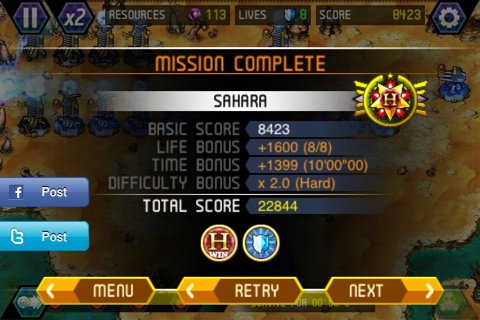 Comments Off on B4. Sahara (Hard)

All you need is cannon towers to complete the level on hard. Once again the motto is to upgrade before you build more. Place your towers as I’ve done, 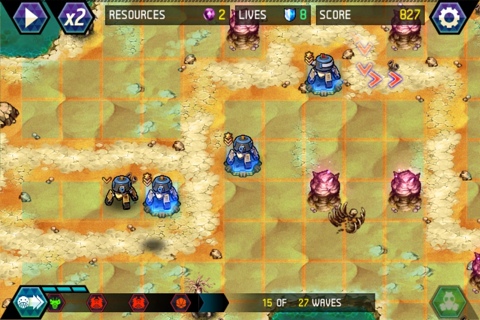 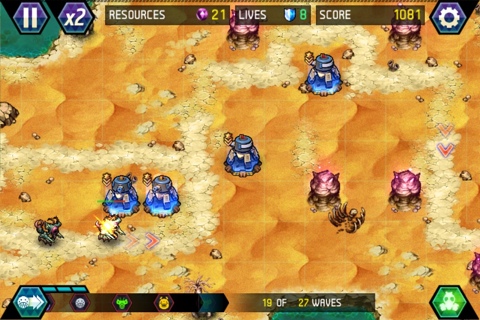 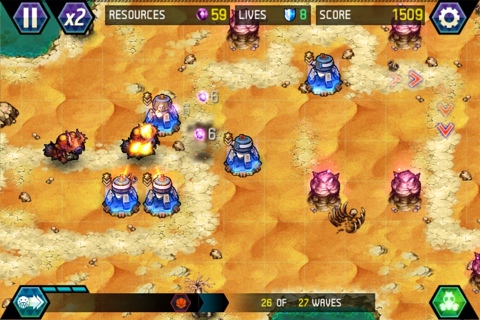 Comments Off on B3. Santa Fe (Hard)

On this level you will first encounter enemies known as spawn. When you eliminate a spawn it splits itself into three fast moving smaller enemies.

Cannon tower are effective against spawn enemies as they are fast firing. Place your towers as I’ve done below. 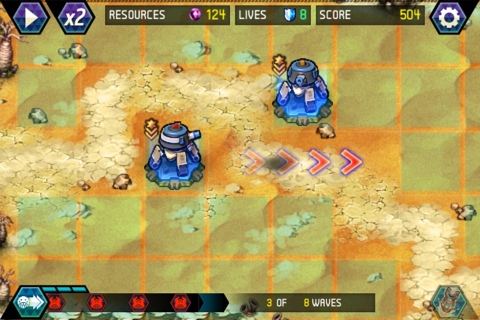 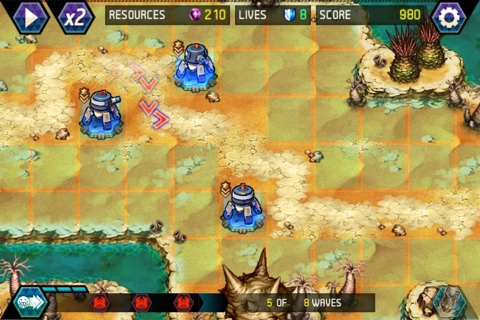 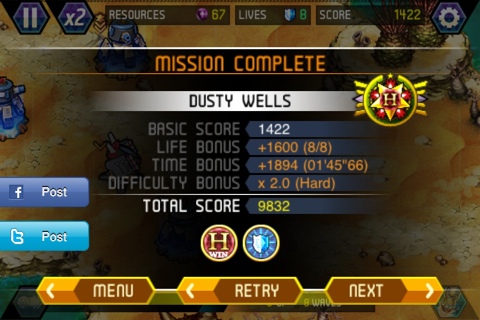 Comments Off on B2. Dusty Wells (Hard)

This level can be completed on hard by only building three towers. Two splash towers and a slow tower.

Start with the splash tower, and upgraded to it’s maximum. 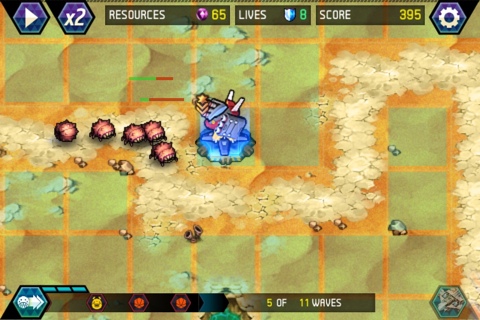 This is the first level when you get to use the generator tower. The generator tower does not attack enemies, instead it collects resources for you to use. You place the generators on the glowing pink squares. Generators cost 100 resources, but they will give you back 300. They are a good investment, you should use them where you can.

Start by building a generator, and collect the resources. This will give you enough resources to build a cannon tower. 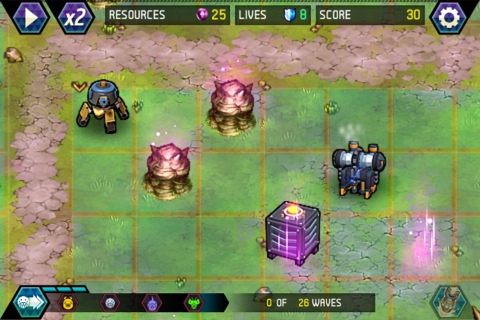 Build a tower in the top right hand side as below. When you can, eliminate the pink blobs to generator more resources. 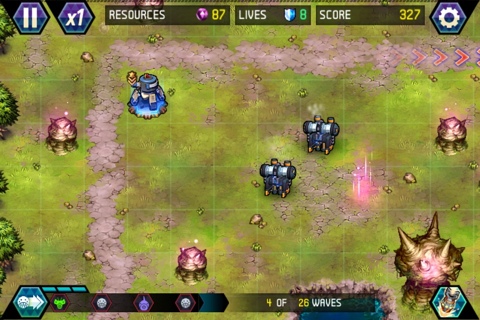 Build another tower below the first. Upgrade it. 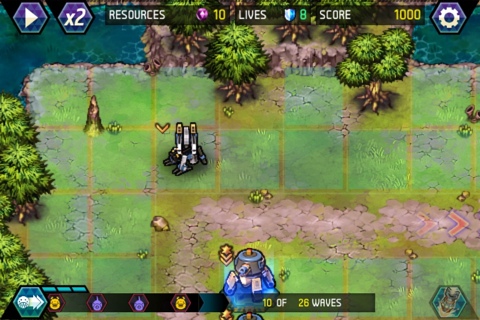 Build a laser tower as shown. This will fire down and take out lots of enemies as they enter the level. 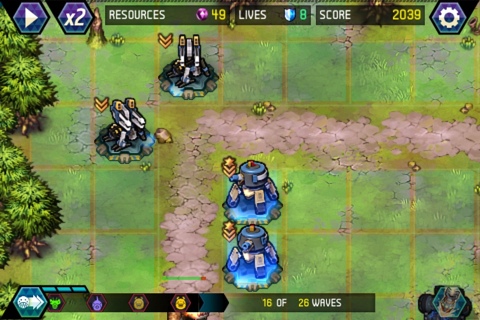 Upgrade the laser tower and build another covering the path from left to right. Upgrade the towers once each. No more.

Start building cannon towers on the right. Upgrade them all. You’ll need to build these to take out stray enemies and for the boss on the final level. 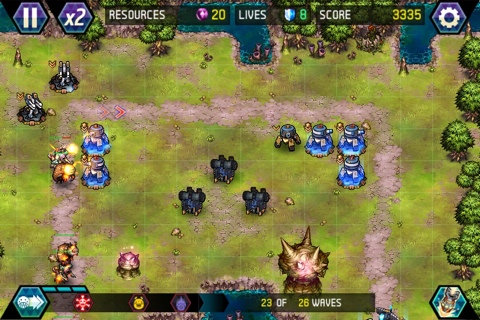 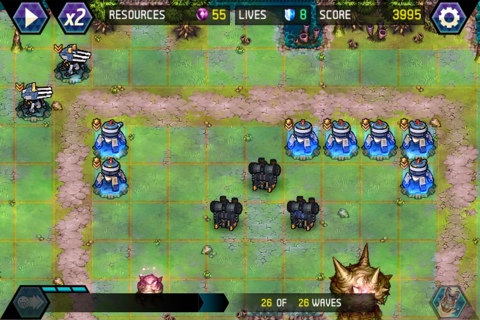 Here is the final shot. This setup is enough to take out the final wave for the big boss. 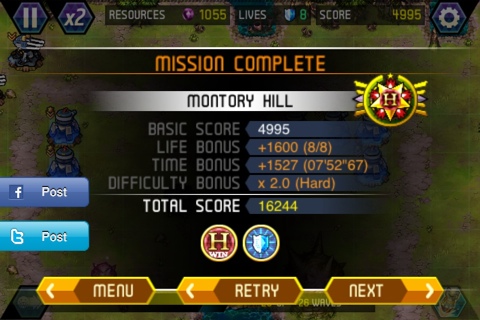 Comments Off on A8. Montory Hill (Hard)

I found this level one of the easiest to complete, even on hard. All I built was a laser tower and upgraded everything.

Build a laser tower in the top right, at the corner of the path. 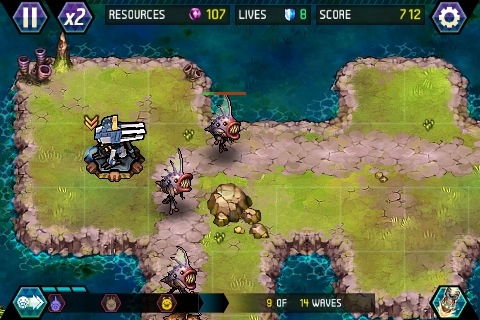 Upgrade the left laser tower once.

Upgrade the right laser tower once. 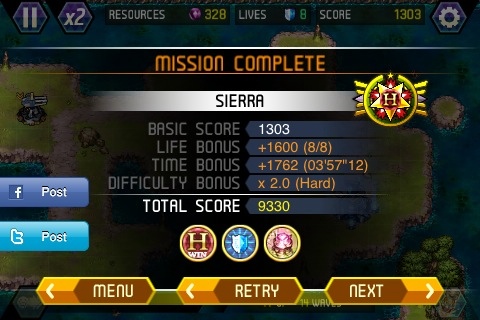 Comments Off on A6. Sierra (Hard)

I had to break my own rule to complete this level on hard. Normally I would always say that the most effective way of completing levels is to upgrade your towers before building others, when I tried this method, I failed.

The level can be completed by building three un-upgraded towers. It will take you to around wave 5 or 6 before you can build your second splash tower. If you are going to take out the pink blobs, then make sure that this doesn’t come above eliminating the enemies. 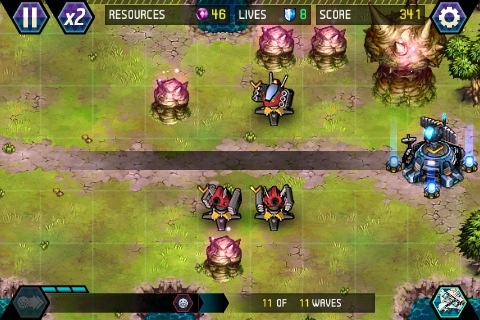 ← Older posts
Your Guide to: Tower Defense by COM2US
Blog at WordPress.com.